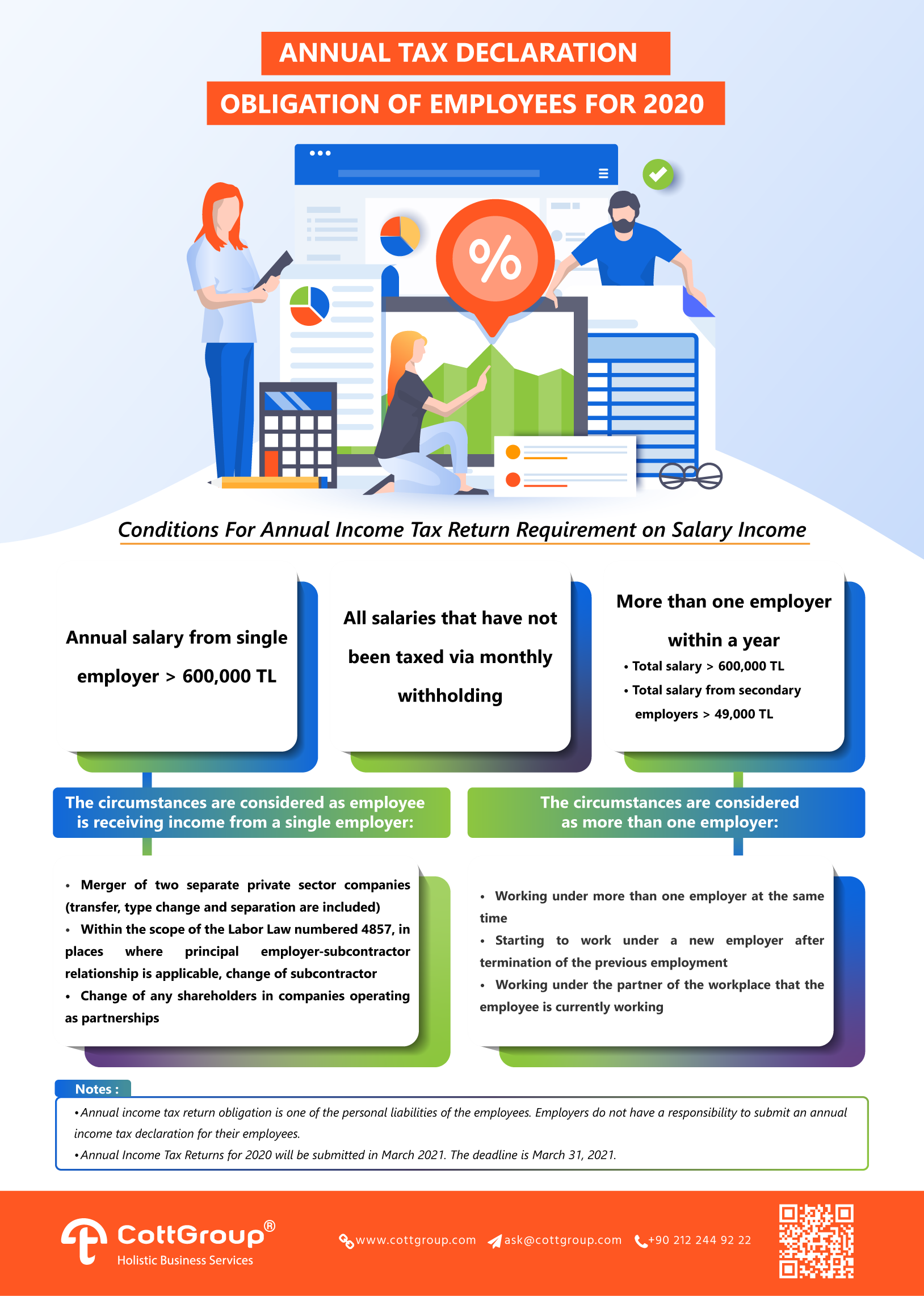 According to the general communiqué no: 311 which has been published by the Revenue Administration Directorate on 27.05.2020 explanations regarding taxation of salaries are as follows:

a) In case of total income amount of taxpayers, who receive salary income from a single employer, exceeds the amount indicated in the fourth income bracket (600.000 TL for 2020) of the tariff written in the 103rd article,

b) In case of total income amount of taxpayers, who receive salary income from more than one employer, exceeds the amount indicated in the fourth income bracket (600.000 TL for 2020), including the income received from primary employer,

c) In case of taxpayers’, who receives income from more than one employer, total income received from the secondary employers exceeds the amount in the second income segment of the income tax tariff (49.000 TL for 2020),

salary incomes will be declared with annual declaration.

1) In below circumstances, employee is considered as receiving salary from more than one employer:

3) Below circumstances are considered as employee is receiving income from a single employer:

4) Salaries that are considered to be received within the same calendar year will be taxed over cumulative basis.

5) Employee, who changes employers within a year, can request cumulative taxation in accordance with tariffs of income tax basis regarding salary income, by notifying the new employer. In case of a liability of declaring income as per cumulative basis of salary income, paid taxes by stoppage can be deducted by considering cumulative basis calculated over declared basis in the annual declaration.

Salaries paid to personnel working on ships and yachts registered in the Turkish International Ship Registry and salaries paid to R&D, design and support personnel are exempt from income tax. Within the scope of mentioned Laws, income tax deductions are not implemented on the employee salaries. Therefore, it is not possible to declare these fees within the scope of the exemption and to consider in determining whether or not to submit a declaration.

In accordance with the Law on Free Zones, income tax deducted from the employees’ salaries who are working in here, R&D, design and support is left to the employer by deducting them from the tax accrued on the submitted withholding declaration.

Due to income tax deductions, it is necessary to consider whether salary payments done to the employee, who is working within this scope and fulfils the terms, shall be subject to declaration submission.

Same application is also valid for income tax exemptions in other Laws as well.

rates are to be applied.

You can access Revenue Administration's Communiqué No: 311 from the link below (in Turkish):